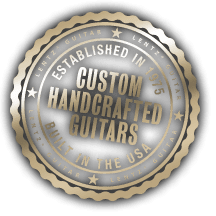 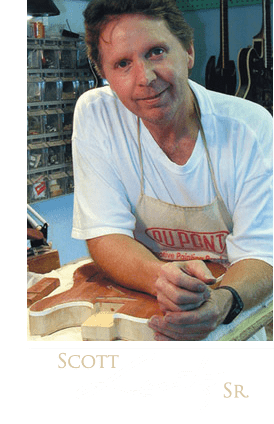 As an active boy with a very curious mind, Scott Lentz Sr. lived with his grandparents, from whom he learned early on the value of hard work and self-reliance. His grandfather had a shop with tools and machines for working with both wood and metal, and Scott had full access to this shop to learn how make things and explore the creations of his mind.

He got his first guitar—an Epiphone Coronet—at age 15, and began learning the blues and playing in bands. But Scott’s passion for life took him in different directions when he was young, and he spent more time surfing and hunting than playing music. At 20 years old, while working as a house carpenter, a friend asked Scott to fix the cracked side of a Framus jazz guitar, which he did in his grandfather’s shop. Although he didn’t know it at the time, this was a pivotal moment in his life: his first insight into the complex relationship between the resonance of wood and the amplified sound of electric guitars, and his first experience of the joys of repairing musical instruments.

Over the next few years, Scott considered what he might do with his life, and he soon came to a powerful decision: that he would express himself through guitars. Not playing guitars, but by working on, improving, and later building instruments. With a focus for his passion, Scott was destined from the start to be a great guitarmaker. What he brought to bear on the process—his relentless curiosity, his deep understanding of the tonal qualities of wood and wire and magnets, and a steadfast desire to continually improve—is what has made Lentz Guitar® quietly grow from a tiny shop in a small, coastal California town, into one of the most masterful guitar-making facilities in the world.

Scott has been striving for the exceptional in guitar-making for 40 years. It is said that it takes 10,000 hours to master a skill, and Scott mastered the skills of guitar-making more than 30 years ago. Scott has stayed true to his vision of building the best electric guitars possible for his entire working life, and he is one of those remarkable people who doesn’t stop learning at mere mastery, but who continues to grow and refine his legendary skills each and every day.

Also worth noting is that Scott Sr. does all the paint mixing and finishing at Lentz Guitar®. His special skill at finish work is unsurpassed, and he has taken finishing to the level of great artistry. In fact, Scott Jr. has such deep respect for his father’s finishing mastery that he has steered clear of finish work at Lentz Guitar®. In his words, “When you have a Picasso in the shop, why mess with a great thing?”

Scott Sr. doesn’t play much guitar any longer, but when he does, it’s no surprise that he plays the blues, one of history’s most expressive kinds of music. Lentz instruments have a well-established reputation for being deeply expressive guitars, and Lentz owners and players frequently describe their guitar as “magical,” “astonishing,” and “the best guitar I have ever played.” In the end, Scott has always made instruments that inspire musicians to play their best, instruments that have a strong voice and exceptional tonal range, and he constantly strives to make his guitars even better.

As a player, there is nothing better than having an instrument crafted that feels so comfortable in my hands that it is effortless to play. Lentz Guitar® delivers with fantastic tone, fine craftsmanship, attention to detail, and spectacular finishes...

My Lentz Guitar® - Artist Reserve S Style gives me the right amount of versatility and awesome playability I need while out on tour filling in for Richie Sambora on the Bon Jovi tour...

Scott - When you said on the phone that this particular build was one-in-a-thousand of the guitars that come from your workshop - you were not kidding. The guitar is a work of art! It is one of the most beautiful paint jobs I have ever seen on any instrument! I say this without hesitation and owning some of the best instruments in the world...

One year, while playing at a guitar show in Dallas, a friend handed me a Lentz strat. It was the first Lentz I had ever played. Now, I had brought my trusty, boutique super strat with me to play. This guitar had been my best friend for years, and the guitar I used on almost every gig. It had beaten every challenger I put up against it...

Scott - the guitar arrived safe and sound on Friday - thank you for the prompt shipment.

I'm sending an email so I make sure I capture all my thoughts. You guys nailed it on every front. Aesthetically, the guitar is stunning. The burst is done just right. The darkness of the Brazilian rosewood is just plain sexy...

site designed and developed by